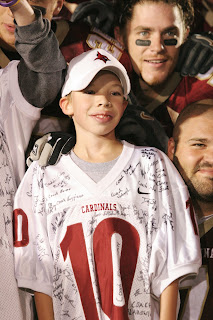 When my daughter, Teddi, was diagnosed with a malignant brain tumor in 1979, it quickly became apparent to me that it was not the surgery, radiation or chemotherapy that was causing her the most pain, it was the loneliness and the fact that her battle with cancer was robbing her of her childhood. Therefore, one of my main objectives when starting Camp Good Days and Special Times 31 years ago, was to be able to provide an opportunity for children with cancer to regain some of that lost childhood, and have the chance to just be kids, with the only others in the world who could truly understand what they were going through – other children with cancer.

I also wanted Camp Good Days to be a place where children and families could create some wonderful memories and I chose the name because I wanted it to be GOOD DAYS when the children were at Camp Good Days, and the memories of the SPECIAL TIMES they had, would carry them through the difficult times. I hope that we here at Camp Good Days have been able to fulfill that commitment of creating memories, through the residential camping experiences and year-round events and activities. Sometimes, we are able to help make memories, through the support of those in our community, who offer the opportunity for some of our campers to be a part of something extraordinary.

This past Wednesday evening, I sat in the Rochester Riverside Convention Center, with some of our staff members, and watched with excitement as one of our campers, Matt Elkins, served as the Honorary Chairman for the Rochester Press Radio Club’s Day of Champion’s Dinner, alongside, Coca-Cola Sports Personality of Year Award Recipient, Super Bowl MVP, Drew Brees. Throughout the entire evening, Matt’s grin went from ear to ear, as he sat next to Drew Brees, in front of some 1200 attendees.

Thanks to the Rochester Press Radio Club, we were able to provide an opportunity for Matt and his family to create some very special memories on Wednesday night. Despite the dais being two-tiered with award recipients and honorees, Drew Brees took a few moments to recognize Matt and to thank him for helping him out. I can only imagine how exciting that was for Matt, to have one of the most popular and successful NFL players take the time to not only take photos and sign autographs but to recognize him in front of all the other honorees and attendees.

It is opportunities and experiences, such as the one we were able to share with Matt on Wednesday, that truly exemplifies what Camp Good Days is all about and why we do all that we do for children and their families whose lives have been touched by cancer and other life threatening challenges, and it is the memories carried away that are the “good days and special times”.
PHOTO: Matt Elkins served as one of the Honorary Coaches with the St. John Fisher College Cardinals, for the Inaugural Camp Good Days Courage Bowl in September 2005.
Posted by Gary Mervis, Founder at 3:23 PM No comments: