Where does the time go? I feel like it was just yesterday that we were putting the kids on the bus and sending them off to camp in July and here we are, more than halfway through October.

My last blog brought us from June to the beginning of September… September is always a particularly busy month at Camp Good Days. We usually try and cram a lot into September because the weather is usually still beautiful, and the fall in the Finger Lakes provides some of the best scenery in the country. 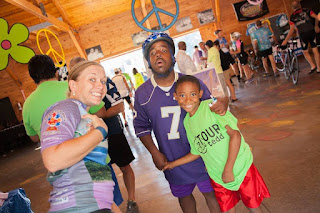 On September 19th, we were blessed with a beautiful day for our annual Tour de Teddi. Unfortunately, I was unable to make it to the ride this year, but I heard that the event was a fantastic time. I, as you may know, am the Kicking Coach for St. John Fisher College’s Football Team, and we had a game that day. I heard from numerous people that by all accounts the people who attended and participated had a great time. Tour de Teddi’s fundraising efforts will help us to continue to be able to provide our programs and services free of charge for the participants. 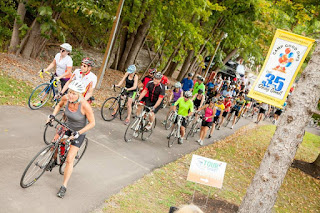 I’d like to extend a special thanks to our Honorary Chair Dino Kay, of Fickle 93.3. We’re so thrilled he was able to join us and bike in this event. 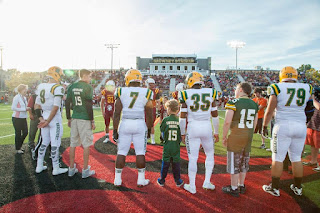 We went into this game wanting to give the Honorary Coaches, which included Sam Gigliotta, Brody Hines, and Noah Martin for the Cardinals; and Padraig Crowley, Matthew Kubisty, and Simon Fendinger for the Golden Eagles; and the Honorary Cheerleaders, which included Ciara Griffin and KorieMae Spirito for the Cardinals; and Aaliyah Akins and Sara Bischoping for the Golden Eagles; a special experience and the opportunity to create some memories that they will carry with them for a long time.  We also wanted to give the players from both teams the chance to spend some time with these amazing campers. 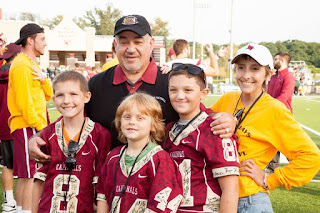 Looking back, we could not have scripted it any better if we tried! The weather was beautiful and both teams showed our campers a great time. Thousands of fans filled Growney Stadium on the St. John Fisher College campus.  It was a perfect day for football, and the game was arguably the best Courage Bowl of all time. The fans who attended Courage Bowl XI were able to see a thrilling double overtime victory for the Cardinals, with a final score of 42-41. The day was phenomenal for Camp Good Days’ campers, and truly lived up to the billing, “More Than Just A Game.” 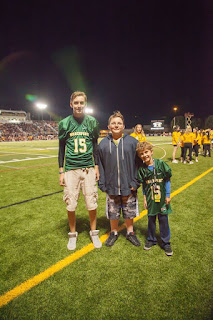 This year’s Courage Bowl, we focused on childhood cancer awareness, and made all of the shirts sold at the game be a shade of gold. We also had a gold balloon launch prior to kickoff to remember the many children who are battling cancer worldwide.

If you want to see just how much fun everyone had at Courage Bowl XI, check out the photo album on our Facebook page, www.facebook.com/CampGoodDays79.

We finished off our camping seasons with two programs: our growing Women’s Oncology Program and the relatively new Men’s Prostate Cancer Retreat. Both programs have proven to be extremely useful programs, and we’re excited to be able to continue these programs.

I’d like to thank former Central New York Director of Camp Good Days, Claire McKenney, who currently runs Paint Nite Syracuse, for donating her time and leading the women in a painting demonstration.

We are so thrilled to share that through the overwhelming generosity of Jay and Jay Jay Vanderstyne, Vanderstyne Toyota, and Toyota Motors, we have been given the opportunity to host the Camp Good Days’ Car Raffle once again!  With the donation from Vanderstyne of a 2016 LE Plus Corolla, one hundred percent of all ticket sales will benefit the children and families at Camp Good Days.  The Camp Good Days’ Car Raffle began on September 26, 2015 and the drawing will take place on Saturday, January 30, 2016 at the Teddi Dance for Love at St. John Fisher College.  The 2016 LE Plus Corolla features power windows, power locks, 16-inch Alloy Wheels, 6.1” Touch Screen / Bluetooth/USB/AUX/CD with Backup Camera, and Power Tilt/Slide Moonroof.  The Toyota Corolla offers the ideal blend of comfort, value and safety.  Tickets for the Camp Good Days’ Car Raffle are $20.00 each, or 3 tickets for $50.00 and may be purchased by contacting Camp Good Days at 585-624-5555 or 800-785-2135 or online at www.campgooddays.org.  Tickets may be purchased using cash, check, or credit card.  The prize winner must be at least 18 years of age. 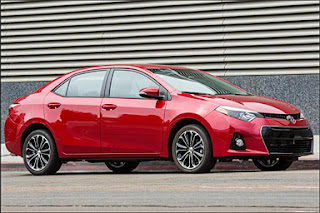 Plans are now underway for the Annual Joe Benet Memorial Kazoo Fest.  I am so excited that the JC Penney stores at Eastview Mall, Marketplace Mall, and Greece Ridge Center Mall have all agreed to partner with us again this year in the Rochester area to have the Kazoo Fest set-up at the mall entrances to their stores.  We are also excited to have Kazoo Fest locations at Destiny USA in Syracuse, the Walden-Galleria Mall in Buffalo, and at the Old Navy at The Shops at Ithaca in Ithaca.  The Kazoo Fest will take place from Friday, November 27, 2015 through Wednesday, December 23, 2015 and is a wonderful opportunity for us to not only generate some much needed funds to help make our programs possible, but provides us with the venue in which to reach many people and share all that we do with them.  We are in need of HUNDREDS OF VOLUNTEERS to help make the Kazoo Fest a great success.  No previous experience is needed and volunteers can select their preferred location, date(s), and times.  All of the Kazoo Fest Volunteer Information and Sign-Up can be found on our website, www.campgooddays.org, or by contacting your local Camp Good Days’ Office (Headquarters / Rochester: 585-624-5555 / 800-785-2135; Buffalo: 716-206-0709; Syracuse: 315-434-9477; Ithaca: 607-266-9180).

Thank you to all of our supporters who continue on this journey with me. Camp Good Days has always been a memorial to my daughter, Teddi, and I cannot thank you enough for helping me to allow this dream to become my reality.

Posted by Gary Mervis, Founder at 3:20 PM No comments:

I know it has been quite awhile since my last post and I apologize for the delay, but to say that this summer and fall have been busy is putting it mildly.

I promised myself at the beginning of the summer that I would try to spend more time at our Recreational Facility during our programs. I am glad to say I was able to spend two or three days at every program this summer, and a full week during our Doing A World of Good program. I wish that everyone had time to spend at Camp Good Days, as it is truly a magical and spiritual place.  It is how the world should be – everyone is accepted for who they are -  it doesn’t matter if you are skinny or overweight, short or tall, a girl or a boy, if you have hair or not, if you have a prosthesis or not. Everyone gets three meals a day, plus snacks, and a roof over their head.  And it all happens in a place as far away from the sterile environment of the hospital, on the shores of beautiful Keuka Lake. Where else can children who have been dealing with cancer, enduring the most potent treatment available, and spending way too much time in the hospital, get the chance to get back some of their childhood that their illness has stolen from them?  And they get to do it with the only ones in the world who can truly understand what they are going through – other children dealing with cancer. 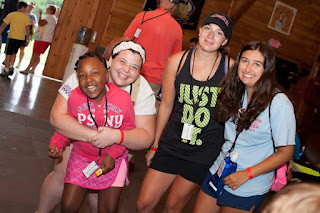 To give you just a glimpse of what it is like to spend a week at Camp Good Days, imagine waking up and fishing from a boat; jumping in Keuka Lake as part of Polar Bear Swim; playing gaga dodgeball; getting pictures taken in our new Ranger station; playing in the new bubble pit; and possibly having the Rochester Rhinos professional soccer team visit, the Colgate Women’s Basketball Team, the St. John Fisher College or The College at Brockport Football teams, Bat McGrath, or even a magician! Not only were many good days and special times had by all of our campers this summer, but two new countries experienced the magic of Camp Good Days, as Spain and Antigua attended this summer’s session of Doing A World of Good.

There is no other place that the campers from Camp Good Days will get that same experience, and we provide all of these programs free of charge for the participants, which is only possible because of the generous support from so many individuals, businesses, and organizations, the success of special fundraising events and activities, and the dedicated summer staff, volunteers and friends who give so much of their time and their love to help make these programs possible. 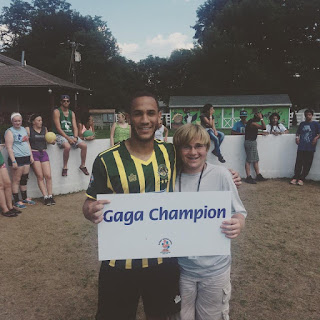 It is hard to believe that our 36th year has come to an end, and while the world is certainly a much different place than it was when we started on this adventure, it is nice to know that Camp Good Days is still driven by volunteers who do so much to create the best experience possible for the campers, and willingly take on the awesome responsibility of sending the campers home at the end of their session in the same condition in which they arrived.

We ended camp with three particularly successful programs with our Leadership Program, for children transitioning in the Rochester City School District from elementary school to middle school; the Brain Tumor Family Retreat, for families that have a member with a malignant brain tumor; and, with the help of the Veteran's Outreach Center, the Inaugural Veteran’s Family Retreat, for families that have a member serving the United States’ military. We are excited to continuously be expanding our programming at Camp Good Days, and are already busy planning our 37th summer. 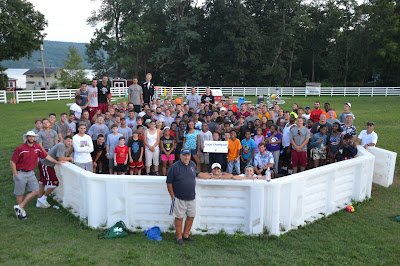 That’s all I have… For now! In my next blog, I will recap Tour de Teddi, Courage Bowl XI, and our Project Exile Report to the Community Luncheon.
Posted by Gary Mervis, Founder at 9:26 AM No comments: