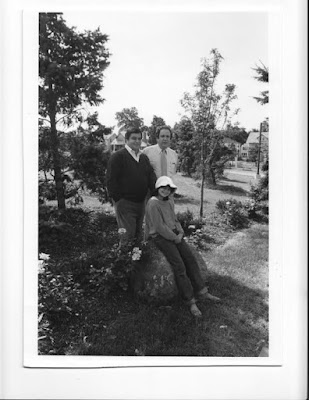 It is with a very heavy heart that I share with you the passing of Dr. Martin Klemperer.  For those of you who don't know, when it comes to Camp Good Days, we would not be here had it not been for Dr. Klemperer.  Dr. Klemperer passed away quietly at his home in St. Petersburg, Florida, on May 23, 2016.


When I first got the idea for Camp Good Days, in 1979, it was at a time when no one talked about cancer - and if they did, they whispered.  At the time, I was just a Dad in my early 30’s, with three children, when my youngest child, Teddi at the age of 9, was diagnosed with a malignant brain tumor, I became her primary caregiver because up until then my work would often take me away from home, and I wanted the opportunity to spend time with my little girl.  I quickly came to realize that it was not the surgery or the eight weeks of radiation or the chemotherapy that followed.  The toughest part of Tedd's battle, was the loneliness, as Teddi was the only child in her school and in our neighborhood dealing with cancer.


One morning as I was getting ready to go to work, I saw a segment on the Today Show about Dr. George Royer a pediatric oncologist in Kalamazoo, Michigan who had started a residential camping program for the patients in his clinic, so that they could see their doctors and nurses, who were often poking and prodding them with tests and treatments, and many times caused them pain and discomfort, away from the sterile environment of the hospital.  I reached out to Dr. Royer and invited him to come to Rochester and I was thrilled that we had more than 100 people (mostly friends) attend his presentation at the Rochester Academy for Medicine.  As I was taking Dr. Royer to the airport, following his presentation, he expressed that he had no doubt we would be able to raise the money we would need to start the camp, and we would be able to secure the many volunteers, and God knows we had the children; however the toughest challenge was going to be finding a doctor who would be willing to devote the time and effort that would be needed, when it was not their idea.  Driving home I went from the top of the mountain to the bottom of the valley.  When I got home there was a message on the answering machine and when I listened, it was from a Dr. Bob Cooper who at the time was the Director of the Cancer Center at the University of Rochester, who had been at the Academy for Medicine for a different reason but when he saw all the people for our meeting had popped in to see what was going on.  He asked me if we had a doctor and I told him we did not.  A few days later he invited me to a meeting in his office and introduced me to Dr. Klemperer.  I had not met Dr. Klemperer previously, because at that time Teddi had not yet started chemotherapy.  We talked for over an hour and he agreed to serve as our doctor.


From that point on, Dr. Klemperer and his wife, Helen would come to Camp Good Days every summer to oversee the medical needs of our campers.  Even when he left the University of Rochester Medical Center to go to Marshall University in Huntington, West Virginia and then to All Children’s Hospital in St. Petersburg, Florida, where he was the head of the Bone Marrow Transplant Unit, he always maintained his New York Medical License specifically so that they could volunteer at Camp Good Days each summer.


Dr. Klemperer was not only an excellent physician, well respected by his peers, but he was an even better human being.  His courage and devotion to children dealing with cancer was evident when he agreed to be our doctor and take on the enormous responsibility of caring for all of our campers, given the fact that they came from various cancer treatment centers from all over the world, after we started our Doing a World of Good Program in the early nineties.  I never once had to worry about the medical needs of our campers.  We made a great team.


Dr. Klemperer could focus on meeting the medical needs of the campers and I could focus on raising the much needed funds, recruiting the volunteers, and planning the programs.  Once we saw that the camp was successful we expanded to provide programs for children who had a sibling or parent dealing with cancer, or had lost a sibling or parent to cancer.  Many of the programs and services started at Camp Good Days have been used as models for other cancer treatment centers and organizations all over the world.  Dr. Klemperer was a true pioneer and dedicated to improving the psycho-social needs and quality of life for children with cancer and their families.  Through all of his years with Camp Good Days he dedicated thousands of hours and he never got a dime or looked for any recognition.  He loved Camp Good Days and the children we served and wanted to be a part of making it a reality for as many children as possible to attend Camp Good Days.


After serving as one of our camp doctors for over 25 years, Dr. Klemperer retired.  The last time we personally saw each other was when I was in St. Petersburg for one of our annual Florida Fun Fest trips.  We talked for a few hours and when he was leaving he gave me the biggest, hardest hug, and when he drove away I thought he had maybe done that because it might be the last time we saw each other.

Posted by Gary Mervis, Founder at 4:56 PM No comments: