At our most recent Project Exile meeting, the Rochester Project Exile Advisory Board, which I have been proud to be the Chairman of since its inception, was presented with a letter from Attorney General Jeff Sessions congratulating the board on their hard work and commitment to getting illegal guns off the streets and out of the hands of people who have lost their right to possess them.  The letter was presented to me by the United States Attorney for the Western District of New York, J.P. Kennedy, who is a great asset to Project Exile.
I have the letter below, along with a picture taken at our annual open house of (left to right) the Sheriff of Monroe County, Todd Baxter, Resident Agent in Charge for Rochester ATF, James Burroughs, myself, and Investigator, Otto Harnischfeger, standing with the letter from Attorney General Jeff Sessions. 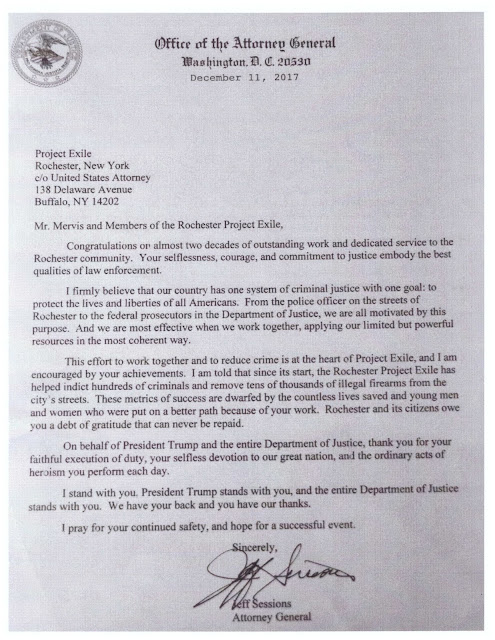 Project Exile was started in Rochester in September 1998, making it the second city to implement the program in the United States after Richmond, VA.  During this time, the homicide rate in Rochester was hovering around 70 homicides a year, which gave Rochester the distinction of having the highest per capita homicide rate of any city in New York State.  It began when I was asked to attend a meeting in a Federal Judge’s chambers, where I met then Acting United States Attorney for the Western District of New York, Denise O’Donnell. As a result of that meeting, Project Exile was implemented in the Rochester community on September 28, 1998.
Project Exile is a collaborative and cooperative effort between local, state and federal government operating under the direction of the Project Exile Advisory Board, comprised of representatives from local, state and federal prosecutors and law enforcement, as well as businesses, clergy, and community organizations.  The Project Exile Advisory Board meets once per month throughout the year, at the Federal Building, to share information and improve communications among those who are waging the battles against illegal guns and drugs in our community.
Rochester’s Project Exile Program is only successful because of the collaboration and cooperation between different state and local law enforcement agencies, and their federal counterparts. What the model also requires is significant cooperation between prosecutors at the local and state level in order to ensure that offenders were pursued by whichever prosecutor’s office could do so most effectively. 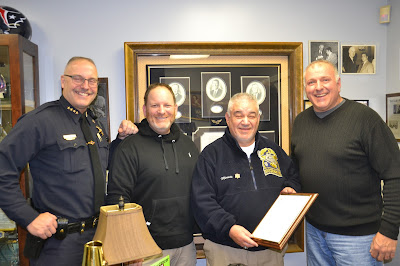 I am proud to say that Rochester’s Project Exile is the longest running and most successful gun program of its kind in America. After almost 20 years, hundreds of criminals have been exiled and thousands of guns have been neutralized, and since its implementation, the homicide rate has never gone back to what it used to be.
Over time, other programs have grown out of Project Exile including the Rochester Youth Partnership Program established by Dr. Mark Gestring at the University of Rochester Medical Center, which is a hospital-based violence intervention program that targets trauma victims under the age of 18 when they present for medical care following a knife or gun injury, and Project T.I.P.S. (Trust, Information, Programs and Services) which was started ten years ago to help build relationships between citizens and law enforcement in neighborhoods where there is unsolved crime.
Posted by Gary Mervis, Founder at 3:41 PM No comments: