We’re into crunch-time at Camp Good Days, with summer programs just around the corner, we’re wrapping up some special events before we shift into camp mode.

At the beginning of June, we held our 32nd Annual Tournament of Love, at the prestigious Monroe Golf Club. After a soggy start, it turned out to be a beautiful day of golf, fun, and laughter. We were lucky enough to be joined by former Camp Good Days Board Member, Bill Polian, who is a current NFL Analyst on ESPN and a former General Manager of the Buffalo Bills and Indianapolis Colts. During his time as an NFL General Manager, Bill possessed a keen eye for talent, and he was successful everywhere he went. I was honored to present Bill with a Teddi Award for his time on the Camp Good Days Board during the 1990s. 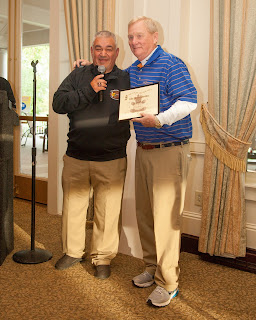 I was also happy to have former Democrat & Chronicle reporter and current host of The Radio Press Box, Scott Pitoniak host a question and answer session with Bill. It was great seeing Bill and Scott converse about the 1990s, and his dilemma of choosing Peyton Manning over Ryan Leaf in the 1998 NFL Entry Draft. 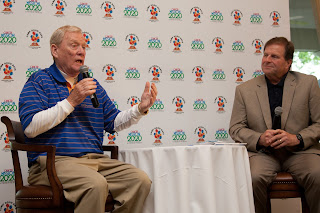 I am also incredibly thankful to Jeff and Carolyn Gerstner, for their role as the Honorary Chairs of the Tournament of Love. With their help, we focused on melanoma awareness. We partnered with The Rochester Melanoma Action Group to provide information on how to protect yourself from the sun, as well as educating the golfers about melanoma. 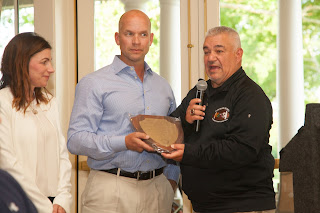 One our our campers, Haley Smith, who currently attends Teddi’s Team, gave a speech about what Camp Good Days has meant to her, and she stole the show. Haley said she was looking forward to making memories this summer at Camp Good Days, and we can’t wait to see her at Camp. 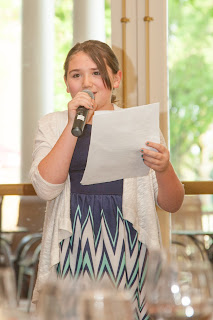 On Saturday, I had the pleasure of speaking to over seventy new volunteers who will be heading to our Recreational Facility this summer and volunteering on a program. It’s always so heartwarming to see the faces of so many ambitious and excited individuals who are so selflessly dedicating a week (sometimes even more) of their summers to Camp Good Days.

After I addressed the volunteers, Monroe County District Attorney Sandra Doorley spoke to the volunteers about the importance of what they are contributing to Camp Good Days mission. Her message was clear, and I am grateful she took the time to speak to our new volunteers.

Later that day, I had the privilege of being a guest at the 14th Annual Camp Good Days Black Tie Gala. Our WNY Regional Director, Lisa, as well as the rest of her office-mates Shaylee, Jenn and Marci pulled out all the stops to hold an incredible event. The Gala was Michael Jackson themed, and everything from the set design, the auction items, to the speakers was unbelievable. There was even a special performance from the Michael Jackson band, “Who’s Bad.” 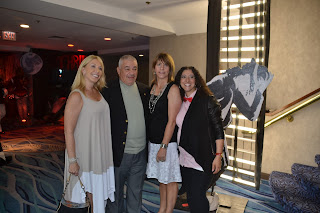 We are very blessed that Rob Lederman from 97 Rock was, again, our emcee for the evening, and he keeps the audience laughing the whole night. We have a great base of friends in Buffalo, all of which it was great to see, from Dave & Mary Pietrowski, to Lindy Ruff, Dan Bylsma, Brian & Leilon Duff, to Mark & Tricia Rosenthal. Camp Good Days is fortunate to have such a vast group of supporters in Buffalo, and I thank all the people who were involved with the event. I’d also like to thank Rob & Kristi Moore, and Moore for Kids, for their $50,000 donation at the event. 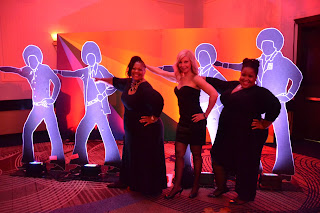 The highlight of the night was listening to the courageous presentation of Sue Underwood, who has been touched by cancer in more ways that anyone should. Her daughter, Kayla, was diagnosed with leukemia at the age of two. Luckily, Kayla’s treatment plan went well, and she is now attending college. Shortly after Kayla’s diagnosis, Sue was diagnosed with cancer. She said how much Camp Good Days’ Women’s Oncology Program helped her cope with her diagnosis. Lastly, her step-son, Jordan, just passed away in January after a long battle against a brain tumor. The pictures that were shown of Jordan while she was speaking were truly moving, and she connected with the audience in a great way. Jordan was a huge Chicago Blackhawks fan, and with the help of our Western New York office, he was able to meet Patrick Kane after attending a game when the Blackhawks played the Sabres in Buffalo. 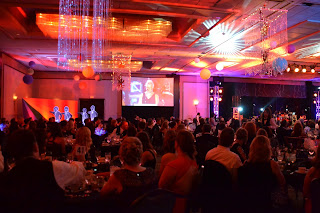 It takes bravery to stand up in front of a crowd and share a journey, especially one of Sue’s magnitude, with complete strangers. Sue exemplified what Camp Good Days is all about, and I was so happy that she was there sharing her story with us.

As summer begins, I will try to keep this blog updated. We have a lot of children slated to come to Camp Good Days this summer, and we’re looking forward to making our 36th Anniversary summer our best one yet. This summer, campers from three new countries will experience the magic of Camp Good Days, bringing our total to 32 different countries. We're eagerly awaiting our new campers from France, Spain and Antigua!

Posted by Gary Mervis, Founder at 3:24 PM No comments: 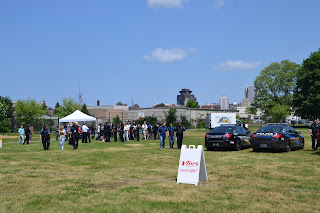 Groups, including two law enforcement officials and two volunteers, visit residents within the neighborhood to create conversations about quality of life issues, as well as to obtain information about the crime and violence that has plagued the neighborhood, in an anonymous format for residents.  The groups also provide residents with information and contacts they can use regarding services that range from health care issues (cancer, diabetes, heart disease) to reporting information for things such as crime, vandalism, and fire. 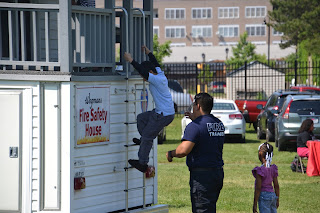 Project T.I.P.S. continues with a community cookout and get together, where residents can come and obtain more information from service providers and law enforcement agencies, as well as have some food and beverages, and have the opportunity to visit with their neighbors that they know and meet some neighbors they may not know. 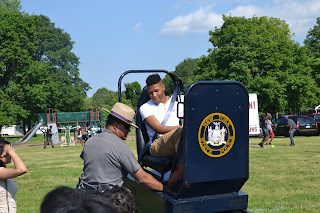 This year, we have been blessed with the presence of Amy Pierson on the Project T.I.P.S. committee. Amy attended the first Project T.I.P.S. at Troup Street Park, and I cannot thank her enough for her involvement this year. Amy has used the loss of her husband, Daryl, as a platform to prevent others from having to undergo what she has gone through. 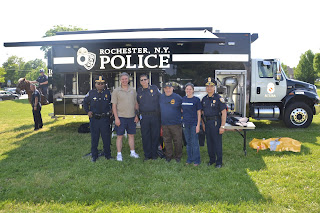 After going on the community surveys, Amy helped out with a bike raffle. Children had the opportunity to win a bicycle and a helmet from R-Community Bikes. In order to enter, they had to fill out a form saying they would never carry an illegal gun, and a parent or guardian had to sign off on it.

I’m so proud of Amy, and cannot wait to see her involvement grow with Project T.I.P.S. in the future.
All of the food was, again, generously provided by TOPS Markets, and we couldn’t do what we do without them. I would also like to thank the Rochester Rhinos, who brought one of their players and Rex, their mascot, to our event. 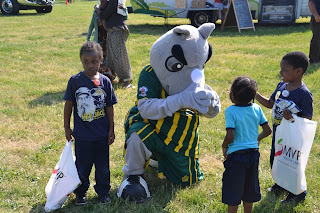 Our next Project T.I.P.S. will take place on Thursday, June 25th. We will revisit a location on the corner of Grand Avenue and Chamberlain Street, where we experienced one of our largest T.I.P.S. ever.
Posted by Gary Mervis, Founder at 2:02 PM No comments: