As you can imagine, things have been very hectic and busy, here at Camp Good Days, and the time just goes by so quickly.  Can you believe it’s almost 2014? As 2013 rapidly comes to a close we are in the middle of the Annual Joe Benet Memorial Kazoo Fest; preparing a holiday gathering for our Rochester campers; completing our annual independent audit and working on the budget for the coming year.


The Kazoo Fest is taking place at the malls in Rochester, Buffalo, Syracuse and Ithaca, so if you are out doing your holiday shopping, stop by the Kazoo Fest tables and pick up some great stocking stuffers and gifts.  If you are in need of a large amount of kazoos, which make a great addition to any holiday or New Year’s celebration, please call our Headquarters at 585-624-5555 and we would be happy to accommodate your bulk purchase.  Once again, I would like to express our sincere thanks and gratitude to the store managers and employees at JC Penney at Eastview Mall, Marketplace Mall, and Greece-Ridge Center Mall, as well as the staff at Walden-Galleria Mall, Destiny USA, and the Shops at Ithaca, for their continued support and for making it possible for us to host the Annual Kazoo Fest at their locations again this season.


If you would like to volunteer at Kazoo Fest, you still can through our website at: http://www.campgooddays.org/NewsEvents/KazooFest/#vols 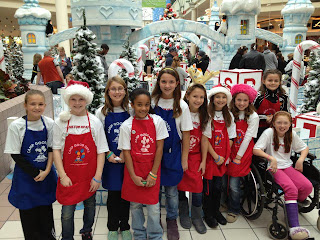 New additions to the Kazoo tables in 2013 include our new hard-cover cookbooks. “Cooking Up Courage” is filled with recipes from campers, volunteers, staff and even a few celebrities. The cookbook is divided into sections including Appetizers, Entrees, Desserts and Healthy Eating. They are available for $15 at Kazoo Fest, and online at http://www.campgooddays.org/News/Details/?id=229.


We went into this game wanting to give the Honorary Coaches, which included Joseph Mayer, Benjamin Hammond, and Anders Swanson for the Cardinals; and Abrahm Freeman, Kelvin Shelton, and Mason Stavalone for the Saxons; and the Honorary Cheerleaders, which included Kayla Tiedemann, Sydney Kresconko, and Lauren Miller for the Cardinals; and Erin Matthewson and Meghan Kleinlein for the Saxons; a special experience and the opportunity to create some memories that they will carry with them for a long time.  We also wanted to give the players from both teams the chance to spend some time with these amazing campers.  We were prepared for a cold day knowing it was a November game. We wanted a competitive game on the field, without injuries, that would keep the spectators interested.  We wanted a respectable crowd in the stands and a halftime show different from previous years.


Looking back, we could not have scripted it any better if we tried! The weather was beautiful and both teams showed our campers a great time. Thousands of fans filled Growney Stadium on the St. John Fisher College campus.  It was unseasonably warm for November, and a  perfect day for football. Although the game ended in the lopsided score of 48-13 in favor of the Cardinals, the day was phenomenal for Camp Good Days’ campers, and truly lived up to the billing, “More Than Just A Game.” 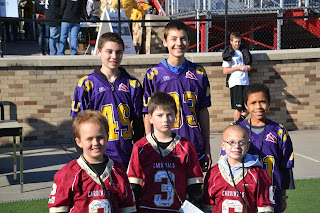 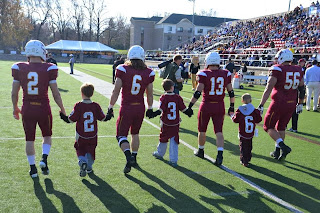 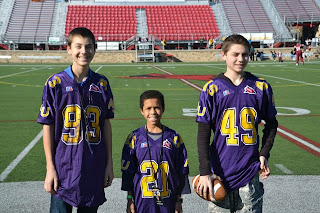 Courage Bowl IX was also the last hurrah for Laura Osborn. After 15 successful years with Camp Good Days, Laura made the decision to move to Florida. She was involved in numerous things at Camp Good Days, and I always say she was the most important task she had was making me look good! Laura is like a daughter to me, and I’m grateful for the relationship we had over the years. We hope to see her when we visit Florida for our annual Fun Fest Trip in 2014!


Chrissy Woods, who has been part of the Camp Good Days’ family for many years, as a Camp Counselor, Aquatics Director, Program Director, and most recently as Camp Director, will be taking on the role of my assistant, handling my calendar, correspondence and assisting with a number of different things we are involved with. This will give Chrissy the opportunity to see Camp Good Days from a different perspective and to learn new skills, and I am pleased that she has accepted this challenge.  Phil Martello, our current Social Media Specialist, who is a recent graduate of St. John Fisher College and has been with us for a year is going to take on the communications and public relations responsibilities.  I am confident that both Chrissy and Phil will do a great job with these new responsibilities and we all wish Laura the very best as she begins this next chapter in her life.


With all of the above-mentioned things, we are adding a Camp Ranger Shed at the Recreational Facility.  Otto Harnischfeger, a Rochester Police Officer and volunteer at Camp Good Days, received the building as a donation. We’re excited to be putting in a “jail” where our campers can get their fingerprints done and where the Camp Rangers will be located.


2014 also marks the 35th Anniversary of Camp Good Days. We’re looking forward to our 35th year and have some plans in the works to help commemorate the anniversary. Former longtime Buffalo Bills and San Diego Chargers Place Kicker Steve Christie is working on a commemorative poster that we will use to recognize our 35th Anniversary.


Our next update will bring you up to date on the 32nd Teddi Dance for Love, the Fayetteville Manlius Dance Marathon, the Ithaca College Dance for Courage, the Clarence High School Dance-A-Thon, and our annual Night of Gratitude.


This special time of year provides us with the opportunity to be thankful for our many blessings.  Camp Good Days has so many special angels, who in small ways and large ways, help us to continue fulfilling our mission and who have helped me to keep my daughter Teddi’s memory and legacy going, and for that I am forever grateful.


The New Year is like a new day, approached with hope and promise and I will do my best in the coming year to keep you all updated on our plans and progress, as we move forward.

Wishing all of you a joyous Holiday Season and a New Year filled with good health, peace, happiness and much love!